Posted by nbdog in Entertainment on 18-May-2009

I’ve seen these ladies on PBS several times and thought it might be fun to see them in person. It was certainly a lavish production given the smallish setting of Seattle’s Paramount Theater. The sound was excellent, the lighting spectacular. The music was OK but oddly impersonal. It’s definitely a group performance so you don’t get any sense of involvement with the artists; you just kind of watch the spectacle. There’s wasn’t room for a full orchestra so the music was an unusual mix of prerecorded and live sound. I was also disappointed that there was no dancing. All that said, the music was nice especially Enya’s “Orinoco Flow,” “Fields of Gold,” and the one song in Gaelic. Noteworthy, too, was the stupendous work of the group’s two percussionists who played on more than twenty drums, a dozen cymbals and a bunch of other instruments I don’t know the names of. In the end it was a relaxing couple of hours and a good break from our intense weekend of yard work. 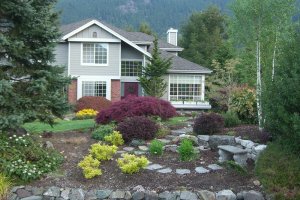 We’ve been tweaking the landscaping of the front yard over the past couple of weeks and wrapped up work today. We added a small rock wall behind the bench, redistributed the barberries and added a few small ground covers and edge accents along the creek. Not visible here are the (now tiny) azaleas under the picture window that replaced the twiggy, twenty year old originals. We may have to do something with the viburnum at the lower left; they were heavily munched on by the elk over the winter.