Whew! A Week of Golf

One of my goals for this summer is to dedicate significant time to my golf game, to see if I can improve my scores and get more consistent. The week of June 13-19, I played three times and practiced on two other days. This past week, I played every day, twice on Friday. So six rounds in five days. By Friday night, I was a zombie. Those six rounds equate to 520 strokes, over 25 hours on my feet, and 20-plus miles walked. With one exception, the quality of play was ok, certainly better than I’ve been doing over the prior year or so. I shot 88, 96, 82, 88, 85, and 90 with pars on 31% of the holes. Putting was generally poor, however. I’ll work on that later. Right now, I’m focused on developing a consistent pre-shot routine and sequence of thoughts prior to and during the swing.

I’m planning on using the rest of June and July to try to improve my golf game. That means practicing and playing more regularly. I played Mt. Si yesterday and shot an 87 (43-44). Ball-striking with my irons was perhaps my best ever. Today, irons were just so-so but I did hit 11 fairways–extraordinarily good for me–and shot 88. But I ended up with just 24 putts for the round including 12 one-putt greens. The bad part was that most of those putts were to save bogey. Still it was satisfying to sink putts of 16, 16, 12, 10, 9 and 8 feet in addition to several 1-2 footers after a good chip.

We have a new baby on the block. A flicker and her chick are living in a large snag in the next door neighbor’s yard and we have an excellent view of them. The little one makes regular bursts of piercing chirps to call for food and mom dutifully provides the meals.

Michael J. Collins’ Blue Collar, Blue Scrubs: The Making of a Surgeonis a memoir of the surgeon’s journey from breaking old concrete (and other very blue collar jobs) to pre-med and residency. The primary focus is on Collins’ family and personal life with relatively little of his actual medical experiences. For readers like me interested in the nuts and bolts of the acquisition of surgical expertise this tome doesn’t compare to the author’s earlier Hot Lights, Cold Steel (not to mention William Nolen’s 1970 classic The Making of a Surgeon). Even so it’s a delightfully told tale with great vignettes of Irish Catholic life in Chicago.

Posted by nbdog in Entertainment on 11-Jun-2010

Cirque du Soleil made another stop at Redmond’s Marymoor Park and we braved a heavy rainstorm to watch Kooza. Although this was the sixth Cirque show for us we were still amazed and delighted. The show featured the standard kinds of acts: tightrope, contortionists, tumbling, balancing on chairs, and the like. However, the difficulty of the tricks and perfect execution make the traditional acts thrilling, even frightening in a few cases. I admire professional athletes but these artists perform at another level of skill. It’s all the more remarkable to think that they do these things eight to nine times a week.

Skeletons on the Zahara retells the story of shipwreck, enslavement and salvation of the crew of the cargo ship Commerce that sailed from Connecticut in 1815. The original narrative was written by the ship’s captain, James Riley and was a favorite of the likes of Abraham Lincoln and Henry David Thoreau. In addition to the incredible tale of survival, the books is replete with fascinating details about history, nomadic society, biology and more. 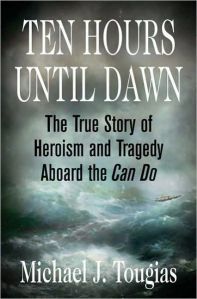 I recently finished Ten Hours Until Dawn, by Michael Tougias. Ten Hours… tells the story Captain Frank Quick and the crew of his pilot boat the “Can Do” as their aborted rescue mission turns into a struggle of survival off the coast of Salem, Massachusetts during the great Blizzard of 1978. It’s a harrowing, spellbinding and tragic tale. Tougias does a masterful job of characterizing each member of the crew and documenting their heroic final hours. I realized as I read that I remember this storm. I was just beginning my second semester teaching at Rutgers University in New Jersey and I wasn’t able to get to my office that day.

"The Nine" – An Excellent Read

The first book I selected to read on my new Barnes & Noble Nook e-reader was Jeffrey Toobin‘s The Nine, a superb history of the major cases and figures of the Rehnquist Supreme Court from 1992 to 2005. The book confirms the obvious: the systematic evolution of the court from the liberal days of Chief Justice Warren Burger to the most conservative panel in over a century under John Roberts. It is sobering the learn how so few key individuals guided the change beginning with Reagan’s inauguration in 1981. Troubling, too, is how overtly political the appointments have become and how closely the Reagan/Bush appointees follow the party line. Two personalities stand out in particular in this regard. Justice Scalia has what I can only characterize as a weird literalist view of the Constitution while Justice Thomas seems like a deeply troubled, close-minded, disinterested (and probably incompetent) jurist.