Posted by nbdog in Animals, jigsaw puzzles on 27-Apr-2014

The variety in ducks in amazing.  This puzzle was pretty challenging for just 500 pieces.  But those quackers are certainly beautiful animals.

It’s been a very wet spring, we’re told, with a record 19-plus inches of rain since February 1st. The past few days have been so typical: periods of bright sunshine, then heavy showers, maybe a rainbow now and then, then a little sleet. Looking at the extended forecast things should start to really perk up around the third week of May when we will see temps in the 70’s and days of persistent sunshine. For now, it’s mostly like this….

As we were preparing to go to bed last night we heard the unmistakable sounds of crashing bird feeders.  I grabbed a flashlight expecting to see cavorting raccoons but instead was greeted with the sight of a very large black bear feasting on the two suet feeders we normally leave out a night.  A couple of shouts and he lumbered off toward the back of the yard.  Today we discovered he simply tore down a segment of the wire fencing at the back of the lot, the very same spot where I  think a bear tried to enter the yard a couple of years ago.  Amazingly, he managed to not crush a single plant nor break any branches off the several rhododendrons he passed.  There were a few nice paw impressions in the soft soil that give an indication of the size of our hefty visitor.

In addition to making the fence repair, I had to replace insulation in the crawl space today as well. On Monday evening we noticed a wet spot on the dining room carpet near the front door. After hailing a plumber, we found we had a leak in the pipe feeding the front outside faucet so I got to spend a couple of hours soaking up water and replacing wet insulation. A busy day indeed.

It took us about ten days to complete this one.  It was the most difficult of the puzzles we’ve done so far.  Our best counts suggests there are about 90 birds in the scene plus a handful of insects. 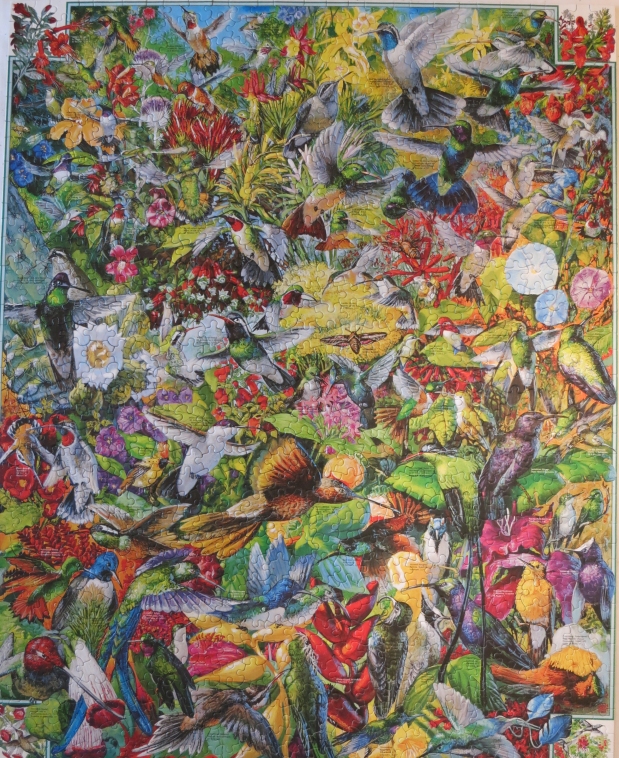 We had a treat today….  Joining our regular small troop of mallards a beautiful male wood duck stopped by for an afternoon snack.  What a  cool bird! 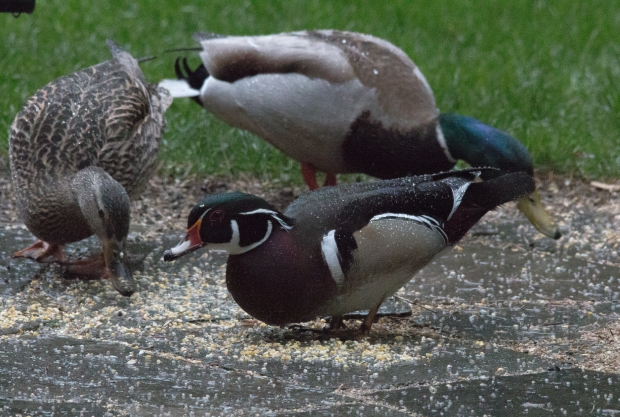 At just 500 pieces, this puzzle went very quickly even though the tree trunks and branches were a challenge.  We love the colors.

At Least I Wasn’t the Only Turkey on the Course

Once again, for the third time, I struggled to tame the Bandon Trails course.  A few bad holes and not enough pars produced another mediocre 94.  On the next trip to Bandon, I’m going to play the Trails course first, before I wear myself out on the other courses.  Still, it was another delightful stroll through the forest accompanied by a family of turkeys just near the 16th tee box.

I played Bandon and Pacific Dunes today and despite being inconsistent off the tee I pared the final two holes to shoot my best score yet on Bandon Dunes –89– and hung in there with a 92 on Pacific Dunes despite two triple-bogey holes.  I also got around with just 33 and 30 putts for the two rounds. I never get tired of the view from the 16th tee at Bandon Dunes:

I started my three-day mega golf event on the benign Pacific Dunes course where I shot an OK 92.  For the second round of the day I decided to finally take on the more-challenging Old Macdonald course, about which I had heard omninous stories and purposely avoided on earlier trips.  I was pleasantly surprised.  ‘Old Mac’ is unlike any course I’ve played: it has huge sweeping vistas, the widest possible fairways, intimidating bunkers and absolutely massive greens.  But I played ok.  In spite of a couple of really ugly holes I shot another 92 with a steady 36 putts, a reasonable achievement on these greens. 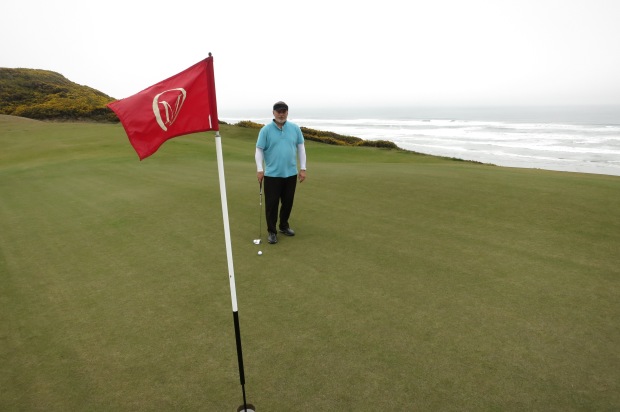 The Mt. Si Golf Course decided to take advantage of a few days of lovely spring weather to aerate the greens so I was left with driving a ways if I wanted to play any of the nicer, more challenging nearby courses.  On a whim, I decided to use the drive time to go all the way back to Bandon Dunes Golf Resort and get in an orgy of golf all at once.  So less than a month after my previous trip I loaded up and headed south.  Sunday was a gray day but perfect for the seven hour drive.  I got to Bandon in plenty of time to get in a couple of hours of practice and have an early dinner in the town of Bandon.  I got some nice photos of the sunset near the famous Face Rock on Bandon Beach.