I’m glad we did some yard cleanup this Saturday and Sunday because the coming  week looks pretty grim.  I’m playing in a scramble tournament on Sunday so I hope we get a break from the drizzle by then.

It’s a typical spring day, I guess.  We woke up to a 2-3 inch blanket of fresh snow.

The good news is the sun came out and by 1:30 I was on the golf course for a couple of hours of practice.

First Day Cover from the 1947 International Philatelic Exhibition in NY

After a little tease of nice weather yesterday, the first day of spring brought more rain, sometimes heavy and sometimes mixed with a few snowflakes. In fact, it’s snowing again as I jot this post.

I’m still wading through my stamp collection, now cataloging the first day covers.  I stopped collecting them over ten years ago but I still have over 500 of them.  That’s part of the delight in the cataloging project, I guess: really finding out what I have.

I’m getting antsy, though.  My thumb has healed enough that I’m going to hit some golf balls this weekend if the forecast for sunny weather holds.  I chipped a few in the back yard yesterday and it felt OK.

The Atlantic has a wonderful selection of spring photos.

More of the Same…

… dreary weather.  As usual we are right on the edge of the snow line.  We’ve had light flurries here all morning while just three miles down the hill in North Bend it’s a light rain.   It looks like more of the same for the next week at least so I’m still hunkered down with my stamps and occasional breaks to watch NCAA basketball.

A Little Color in the Drizzle

As winter lingers and we endure this endless march of rainy days, it’s nice to look outside and see a few little sparks of color in the garden.  Trisha planted some hellebores last year and they are stunning winter bloomers. During a brief break in the rain this afternoon I raced outside and had these little ladies pose for me.

For Christmas I got Trisha one of those big Amaryllis bulbs I’ve seen so many times in gift catalogs over the years.  I had no idea what to expect so what a delightful surprise it’s been to watch these enormous, magnificent flowers emerge from simple long stems with no leaves.  Pretty cool.

Winter lingers.  We awoke this morning to a lovely coating of snow and snow squalls and sun breaks alternated throughout the day.  All so typical of this time of year.  I guess I timed my hand surgery right: there’s no sign of any sunny days until Tuesday. 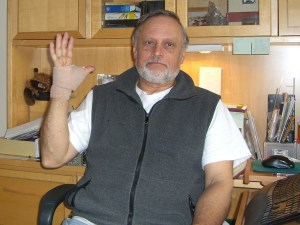 The same “trigger finger” malady that bugged me during my last year of work at Microsoft came back, this time in my thumb.  I received a cortisone injection on it last year but it came back.  I was able to schedule the surgery during the same time as the NCAA basketball tournament and while the weather is still mostly wet so I hope to be able to golf again by the end of the month. In the mean time, it’s lots of TV-watching and more work on the stamp collection.  I can still use the keyboard, manipulate the mouse left-handed and manage the tweezers when needed.

With the forecast calling for mid-day highs in the 50’s I decided to make the 90-minute trek to Trophy Lake, one of my favorite area courses.  It turned out to be a delightful day, weather- and golf-wise.  I put in a solid couple of hours at the practice range yesterday so I was excited to get to the first tee.  After a pedestrian bogey on the first hole I reeled off six consecutive pars and ended the front nine at just two over par and 13 putts.  My success continued with pars at holes 10, 11 and 13 so I went to the 14th tee at just four over.  As often happens I hit a stretch where I was bedeviled by that ugly left hook off the tee and went nine over for the final six holes.

Still, it was my best round at Trophy Lake and an 85 at a course with a 128 slope rating is a great result for me.

This also marked my 12th consecutive  round under 90, tying my best at that stat.  My scoring average over 13 rounds this year is 86.8, really good I think considering the generally crummy weather I’ve played in until today.

Putting Notes.  Although I’ll continue to work most on the longer clubs during the spring trying to improve fairways hit and greens in regulation, I’m still aware of how important putting is.  Over the past three rounds, I’ve holed 24 of 27 putts from ten feet and closer.  That kind of putting inevitably saves two to three strokes per round.

It’s that time of year when, even though the days are getting longer, the weather is still mostly gray skies and drizzle.  Or, as we

have today, three-four inches of snow. I’ve saved lots of work on my stamps collection just for these periods.  I’ve been spending hours a day fully cataloging each and every U.S. stamp I have. So far I’ve finished 1990 to 2011 and 1857 to 1953 and the count is just a little under 5,000 unique items.  Just last week I sent off 1,800 stamps to a dealer in Utah and I’ll use the proceeds from that sale to fill in a missing older items.