Forty Years Ago – The Doors At Cobo Arena 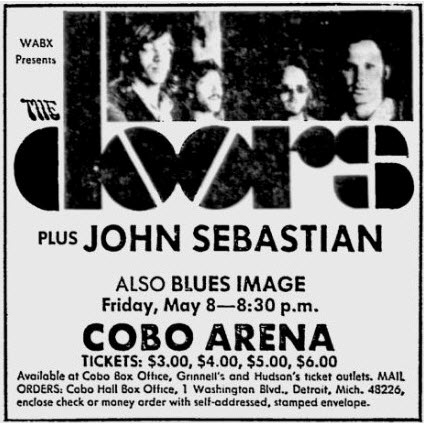 I was there.  I recall this concert very well for various reasons.  For one I remember how tired I was by the time The Doors came on stage; it must have been well after midnight.  Me: I was wearing a suede leather jacket with fringe on the sleeves and bell-bottom jeans.  Any how many people in the audience were just totally stoned out of their minds, most on marijuana but probably a good mixture of other things as well.  And Morrison himself seemed drunk from the beginning; I think he came out with a bottle of beer in his hand.

But my most positive impressions were of the two lead-in acts, Blues Image and John Sebastian.  Blues Image was just emerging as a major group (although very short-lived) but they were really polished: great instrumentation and harmony.  Then after a long pause, John Sebastian came out, sat on the edge of the stage –just him and his guitar– and offered a series of lovely solo songs.  I was impressed how he mesmerized thousands of doped-up hippies who had been dancing in the aisles a short time earlier and were waiting for the insanity of The Doors.   His performance and the guitar work of Dickey Betts of the Allman Brothers a few years later at the University of Iowa were the best live rock events I’ve seen.

This entry was posted on 8-May-2010, 11:00 pm and is filed under Personal. You can follow any responses to this entry through RSS 2.0. You can leave a response, or trackback from your own site.